The angel of death stands between heaven and earth, holding a poison-dripping sword. Identified with Satan, he is full of powers, a diligent reaper, an old fugitive and wanderer like Cain, a beggar, a pedlar, an Arab nomad, a skeleton, capering with sinners and misers in a jugglers' dance. But the nightmarish angel presents a different face to the one who has died before death, who has attained some measure of the apathea of a saint.

We are told that Azrael, Death, appears to our spirit in a form determined by our beliefs, actions, and dispositions during life. He may even manifest invisibly so the man may die of a rose, a rheumatic pain, or of a rotting stench. When the soul sees Azrael, it falls in love, and its gaze is thus withdrawn from the body as if by a seduction. Great prophets and saints may even be politely invited by Death, who appears to them in corporeal form. Thus it was with Moses and with Mohammed. When the Persian poet Rumi lay on his deathbed, Azrael appeared as a beautiful youth and said, "I am come by divine command to enquire what commission the Master may have to entrust in you."

In fact, a strange connection becomes apparent between mors and amor, love and death. The moment of extinction in the pleasure of love resembles that of death, and thus, that of the mystical. In mythic terms, Eros and Thanatos are almost twins, for in some cases Death appears as a lovely youth and Eros as a withered starveling. Both love and death are gateways, hence their eternal adolescence and their fixation in the midst of the rite of passage. 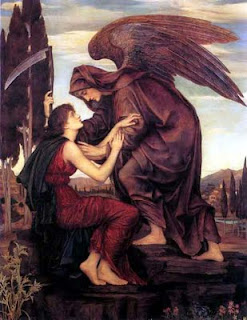 from the Golden Section - Coil - Horse Rotorvator  - narrated by Paul Vaughan on the album, read from the book Angels: Messengers of the Gods by Peter Lamborn Wilson
painting - the angel of death - Evelyn De Morgan